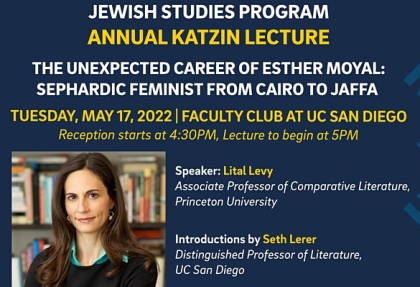 Talk: The Unexpected Career of Esther Moyal: Sephardic Feminist from Cairo to Jaffa

In this lecture, meet Esther Azhari Moyal, a trailblazing intellectual who made her mark in the modern Middle East as the world burst into the twentieth century. The only Jewish woman writer of Arabic in her day, she was a star of nineteenth-century Arab feminism, a prolific journalist and literary translator, and an activist for Jewish causes. Born in Beirut in 1873, she lived in Cairo, Istanbul, Jaffa, and Marseille. Through the unique prism of Moyal's life and work, this talk addresses early twentieth-century Muslim-Jewish relations, Arab feminism, and Arab perspectives on the Dreyfus Affair.

Speaker Lital Levy is Associate Professor of Comparative Literature at Princeton University. She received her Ph.D. from UC Berkeley and was previously a Junior Fellow at the Harvard Society of Fellows.