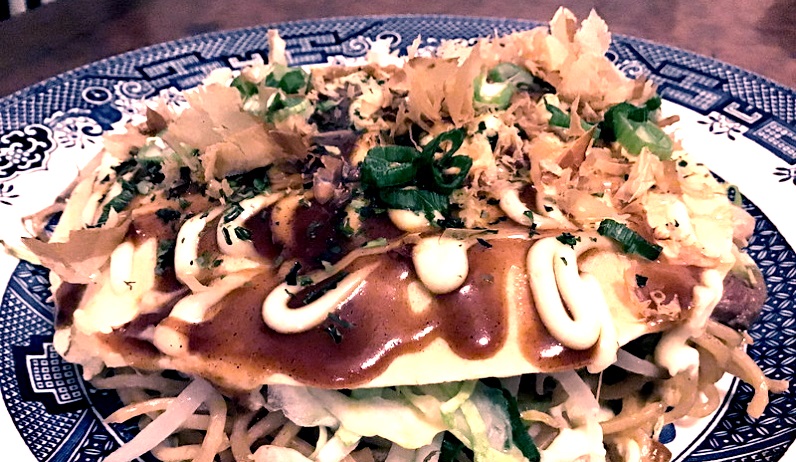 Okonomiyaki is sometimes referred to as "Japanese Pizza" or "Japanese Soulfood", this savory dish is a meal in itself and the blend of tastes is outstanding. This version is the Hiroshima style.

The word Okonomiyaki is derived from okonomi meaning "what you like" and yaki which means fried, grilled or baked. There are two major variations; The more widely found Osaki (or Kansai) Okonomiyaki which mixes many of the ingredients into the batter before it's cooked and the Hiroshima style Okonomiyaki which layers all the ingredients and adds a cooked egg and fried yakisoba noodles. Tokyo style Okonomiyaki is similar to the Osaka version, but the fritter is substantially smaller in diameter. Okonomiyaki is a relatively recent invention. Although there are possible precursors, Okonomiyaki made its first appearance in Osaka after WWII. In the war torn country food was very scarce so people had to make use of whatever they could find. Although rice is undoubtedly the most essential staple in Japan, after the war it was hard to find. Beyond the basic ingredients (batter, cabbage, sauce) you can add whatever you fancy although the recipe presented below is fairly standard. If you travel to Hiroshima and order Okonomiyaki, you will be served the Hiroshima style and although it is not as widely distributed as the Osaka version, there are nearly 2,000 okonomiyaki restaurants in Hiroshima. The dish used to be a street food, but now it is even more likely you will find it in a sit down restaurant. It is often found in festivals,usually the Osaka version which is easier to prepare. The following ingredients can be purchased in a Japanese or Asian grocery store.

Cook's notes: This dish uses thinly sliced pork belly which for all practical purposes is bacon that hasn't been cured, smoked or flavored. You can use bacon as a substitute but try to get a brand that is uncured and not overly flavored. We used a crepe making machine to make this dish, it worked superbly. Such machines are very inexpensive.