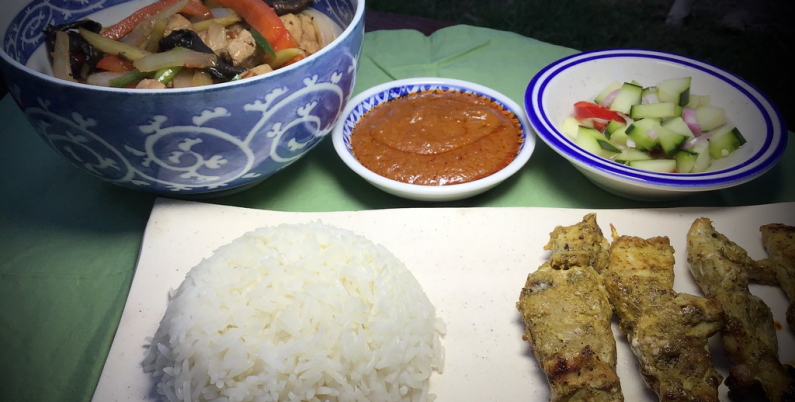 We have a double billing for the Participant Observer Recipe of the month: Gai Pad Khing (Thai Ginger Chicken) and Moo (pork) Satay (with Ajaar pickle salad). The satay makes a great appetizer (and oddly enough it's the more complicated recipe while the Thai Ginger is a delightful spicy dish that gets it's heat from copious quantities of ginger! >As we have noted in so many previous recipes, so much of the world's cuisine and every country's signatures dishes are the result of cross-cultural flows of ideas, ingredients and historical contact. Plantains originally come from India, chilies enjoyed around the world originated in Meso America, Japanese tempura may have been learned from Portuguese missionaries, Vietnamese Pho was influenced by French cuisine, and even Fish and Chips owe much to Sephardic Jews who emigrated to England. Thailand has not been immune to such historical-cultural processes, but because it was never missionized to any great degree, because it was never colonized by nations afar, and because it has relatively less immigration, its cuisine has been more culturally unique than the food found in other nations and most of the cross-cultural influences are a bit closer (Laos, Burma/Myanmar, Cambodia, and originally China). Of course, some Thai ingredients do have origins from afar (notably chilies brought by the Portuguese in the 1600's), but again it's a difference of degree not of kind. Oddly enough (as mentioned below), eating utensils do owe their prevalence to European influences. Chickens originated in Southeast Asia and pigs have been raised for meat for a very long time in Asia, as they were first domesticated in Mesopotamia as early as 13,000 BC!

The satay recipe uses pork, the overwhelming choice in Thailand. But elsewhere in Southeast Asia, beef, water buffalo and chicken are used for satay. You can use any of those meats in this recipe if you have a preference other than pork. If you have never had Thai Ginger Chicken, you might be misled by the recipe to think that it goes overboard with ginger. Indeed this amount of ginger leads to a spicy-hot experience that doesn't rely on any chilies. But cooking the ginger brings down the "temperature" quite a bit (the longer you cook it, the milder) but the "bite" makes this dish rather uniquely delicious. Some recipes call for the addition of red chilies, but this is somewhat unnecessary as unless you overcook the ginger substantially, it will have more than enough "heat" to enjoy. You can easily adjust the spiciness of the dish by using more or less fresh ginger. We prefer dark meat chicken for this dish (it remains juicier and has more depth of taste), but feel free to substitute breast meat if you so desire. Perhaps the ingredient that is most unusual is the Tao Jiew, fermented soy bean paste, but we give you several reasonable alternatives. Dried wood-ear mushrooms also might not be a readily available, but fresh can be substituted and other mushrooms can be used as well. The scallions are added last, mostly to add a splash of green color. Like many Southeast Asian foods, these dishes combine salty, sweet, sour and spicy, a combination that creates a lovely riot of tastes in your mouth. It's interesting that in America when we meet someone we typically say "How are you?", where my wife and I lived in Indonesia, the favored greeting is "Where are you going? (Mau kemana?)", in Thailand when people meet they often say "Gin khao yung?” or "Have you eaten yet?" Unlike most places in Asia, chopsticks aren't very popular in Thailand; since the reign of King Rama IV in the 19th century, spoons and folks have been the standard. Large spoons held in the right hand, perhaps aided by a fork (to push food onto the spoon) in the left are preferred for eating rice-based dishes. Chopsticks are mostly used for standalone noodle dishes.

* Note: the only thing I have found that removes turmeric stains is direct sunlight. It works like magic!

Serve with jasmine rice, or as is now common with Thai street satay, thick slices of grilled white bread good for dippin' in the sauce.Ajaar Cucumber Pickles

Special Note: Each of these recipes are substantially based on recipes created by Pailin Chongchitnant for her Hot Thai Kitchen website and Youtube channel. Her videos, culinary knowledge, and preparation guidance are simply the best. Pailin also has a cookbook of the same title which can be found here.

Additional notes: Long long ago (2008?) we published a recipe for Gai Pad Khing, but this recipe is, we believe to be a better version.