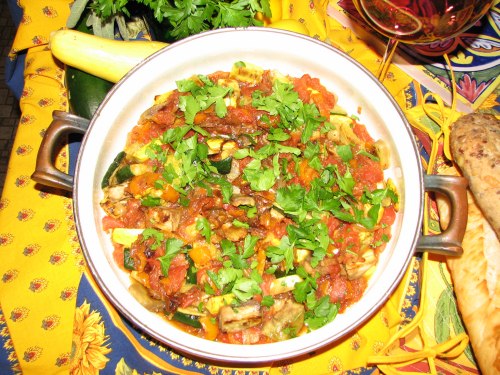 Ratatouille is signature dish of the the Provence region of southeastern France. The word ratatouille is derived from the verb touiller which means "to stir up." The dish is tremendously popular throughout France because it is easy to prepare, uses abundantly available ingredients, and can be served cold or warm.

The Provence region lies along the Mediterranean Sea just west of Italy. Provence's diverse topography is characterized by mountains, valleys, and beautiful beaches. (Sound familiar, San Diegans?) Originally a Greek colony, Provence was once a part of the Roman Empire and was eventually incorporated into France in the 15th century.<

The region's warm weather, coastal location, and the impact of other Mediterranean culinary influences has produced a cuisine at odds with stereotypical notions of French food. The Provencal cooking is more akin to neighboring Italy than to the rest of France.

It is said that there are three foundations to Provence cuisine: olive oil, garlic, and aromatic herbs (such as herbs de Provence). This makes ratatouille a quintessential Provencal dish

Our recipe and preparation follow the notion that in order to “do ratatouille right,” the component flavors should not be mixed and muddled. The vegetables should be cooked separately and then arranged in layers so that each will retain their distinct flavors.<

The following recipe is was adapted from "Mastering the Art of French Cooking" by Simone Beck, Louisette Bertholle, and Julia Child.