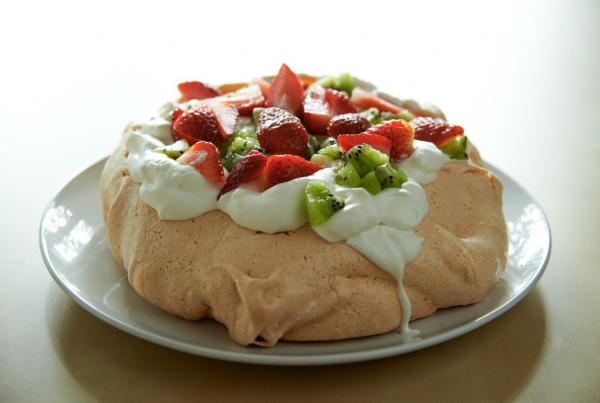 Despite it's unassuming apperance Pavlova (a sweet meringue-like dessert) created a decades-long culinary war between New Zealand and Australia. Due to its airy consistency (inspired by ballet dancer Anna Pavlova), the dessert is especially perfect for the summer months as it can be topped with all kinds of seasonal fruit.

>Pavlova is a sweet meringue-like crust that is topped with whipped cream and fresh fruit. The dessert itself was named after the Russian ballet dancer, Anna Pavlova, who visited Australia and New Zealand in the 1920s. She created such a frenzy with her visits that during the decades to follow it, the name “Pavlova” was used for all kinds of desserts, from trifle-like, gelatin-based creations to cakes and meringues in various forms.

According to Anna Pavlova's biographer, Keith Money, the original dessert to honor the famous ballet dancer, was created in 1926 by a chef at a hotel in Wellington (New Zealand) who drew the inspiration for the dessert from one of Pavlova's tutu's that was covered in netting and green silk roses. The first official recipe of Pavlova—the way we know it today—was published in 1929 in the New Zealand Rural Magazine. However, it wasn't until 1935 that a Perth (Australian) chef Bert Sachse developed his Pavlova recipe, that the name and recipe became more widely known around the world. Currently, most sources agree that Pavlova was first created in New Zealand, although both Australia and New Zealand have contributed to its present form.

Traditionally, Pavlova is made by beating egg whites to a stiff consistency and then folding in sugar, white vinegar, cornstarch, vanilla extract, and cream of tartar (a thickening and rising agent). Cream of tartar can be substituted for lemon juice or extra white vinegar to achieve a similar result. After mixing, the mixture is baked slowly, similarly to a meringue.

The main difference between Pavlova and meringue is the addition of cornstarch, which changes the consistency of the dessert. Unlike meringue which is solid throughout, Pavlova has a crisp outer shell, but a soft, marshmallow-like inside. The addition of cornstarch also makes Pavlova significantly more fragile than a meringue. As Pavlova is notorious for deflating if exposed to cold air, it is very important to leave it in the oven to fully cool down before the oven door is opened.

Before serving, top the Pavlova with whipped cream and chopped fresh fruits. Most of the traditional Pavlova recipes call for strawberries, passion fruit and kiwis to decorate the dessert. In principle, however, any seasonal fruit can be used (raspberries, blueberries, pineapple, pomegranate seeds, mango, etc.). Some of the recipes even include pistachio nuts or almonds.

Although it might seem a bit strange to see a dessert that uses fresh fruit as a traditional Christmas dessert, it makes perfect sense when we think of the location of these countries in the Southern Hemisphere.

The Christmas season in Australia and New Zealand is not about snow, sleigh bells and reindeer, but about barbecues, sun and Pavlovas.

Take a chance and bring some Christmas feeling into your summer this year!