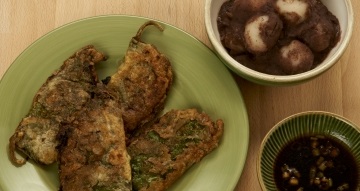 Patjuk and Kkaennip Jeon are Korean holiday treats and Patjuk is a particular favorite for the Korean winter solstice observance of Dongji.

For many thousands of years, astronomical alignments such as the solstices and equinoxes have been seen the world over as special events filled with religious or supernatural significance and ceremonial elaboration. The winter solstice marks the shortest day of the year (when the sun is at its lowest angle at noon). It usually falls on December 21st (as it does this year) or less frequently, on the 22nd. On the winter solstice (and only on that day) of every year the sun's rays shine into the center of the 5,000-year-old mound structure known as New Grange in Ireland. On the equinoxes, the shadowy shape of a mystical snake either slithers up or down the main staircase of the pyramid in Chichen Itza in the Yucatan. At Machu Picchu, Incan priests would ceremonially tie the sun to a large column of stone called the Intihuatana (lit. "the hitching post of the sun") to prevent the sun from escaping. The fact that the hours of daylight increase each day after the ceremony was obvious proof of the power of the ritual. The Korean celebration of the winter solstice is known as Dongji (동지). (It is similar to the Chinese, Dongzhi (冬至) which literally means "arrival of winter." The date is also known as "Little New Year" in Korea. Winter solstice is celebrated throughout east Asia with many variations although some elements (such as the eating of glutinous rice are widely found.

As is true with most religious or cultural celebrations everywhere in the world, food plays an important part. In traditional Korean observations of Dongji specific foods and their manner of use are laced with cultural and symbolic meaning. Patjuk, a sweet red bean and rice ball porridge, is traditionally enjoyed during Dongji. The red beans are thought to chase away evil spirits and sickness and the rice balls symbolize new life. In some places, Koreans would endeavor to eat the same number of rice balls as their age (and in Korea, everyone is one year old the day they are born, and gains a year at the lunar New Year, so if you are "trying this at home," add at least one more!). In days gone by, Koreans are said to have sprinkled the land around their homes with the red bean soup to protect their family from evil spirits. The ritual is based on a Korean folktale about a sinister ghost who is warded off by Patjuk, which he disliked when he was alive. Another traditional belief was that is was a good omen if the weather was cold on Dongji. Warm weather on this day was considered a harbinger of illness and a poor harvest the coming year. Dongji is no longer a major holiday in Korea. Patjuk, traditionally associated with Dongji, is now available in restaurants throughout the year.

You can purchase red bean paste, but if you make it yourself it will taste much better. The recipe is easy and fool proof, but takes a little bit of time to soak and cook the beans. The rice balls just consist of rice flower, water, and a pinch of salt. Although the method of preparation, texture, and presentation are different, Patjuk has the same flavors as Japanese daifuku (大福).

The second dish in this month's recipe offering is Kkaennip Jeon (Stuffed Perilla Beef Jeon). It is a treat that is also enjoyed in many celebrations and holidays throughout the year. Kkaennip leaves are similar to the smaller Japanese shiso leaves. The larger Korean leaves have a taste with hints of apple and mint. The leaves are used in many different recipes in Korea, even in their own type of pickled kimchi. Cooking them releases a taste that is somewhat like sesame and indeed they are often translated into English as "sesame leaves" (even though they are not related biologically to sesame). The Kkaennip Jeon are enjoyed with a vinegar-soy dipping sauce similar to the sauce for Japanese gyoza (餃子) and other dishes. The addition of tofu to the ground beef in the filling ensures that the filling maintains a soft texture even when fully cooked. It is important to fry the stuffed leaves on medium to ensure that the filling is completely cooked and the leaves are kept from burning.

Combine all the ingredients above and serve the dipping sauce in small individual bowls.

If you have the requisite skills, eat the Kkaennip Jeon with chopsticks (Koreans favor metal ones) dipping them into the sauce first.

At holidays and other events, many different dishes are served together.