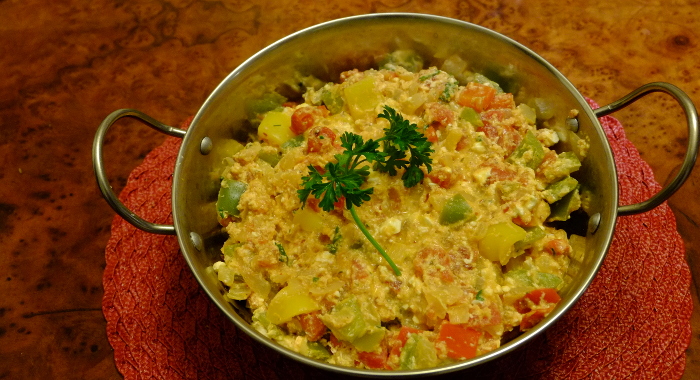 The Participant Observer Recipe of the Month is Turkish Menemen (accent on the 2nd syllable). If you have been reading Participant Observer for a while, you probably know we have a certain affection for street food. This dish has few ingredients, couldn't be easier to prepare, and tastes delightful!

Menemen is traditionally cooked and served in a tin-clad copper pan called a sahan. A large deep frying pan is an adequate substitute. With simple ingredients and the fact that everything is cooked in one pan, it is the epitome of high taste but low effort cooking! When served in restaurants, the edges of menemen are sizzling hot. When served in homes, it is served in a large pan set in the middle of the table from which all share. Menemen can be eaten as a snack, for breakfast, lunch or dinner. When eaten as a breakfast it can become an elaborate affair and can include cheese (beyaz peynir, similar to feta), cured olives, sweeten cucumber quarters, a variety of breads along with Turkish spreads and jams, walnuts, raisins, dried apricots, spicy sausage (sucuk) or cured beef (pastirma). Breakfast is washed down with fresh orange juice and Turkish tea brewed in a "double teapot" (similar to a percolator) know as a Çaydanlik. The basic recipe has few ingredients, but many cooks add whatever pleases them at the moment. Every version uses sweet green peppers but many cooks also add either hotter peppers or crushed pepper flakes (Allepo or Urfa dried chilies are two very popular varieties). Menemen is typically eaten with good crusty bread (that can be dipped into the delicious gravy). When fully cooked, the Menemen should still be on the wet or runny side. Some cooks like to blend the eggs into the dish, others prefer to cook the eggs on the top of the simmering tomatoes and peppers. The dish gets its name from Menemen in the North of Izmir.