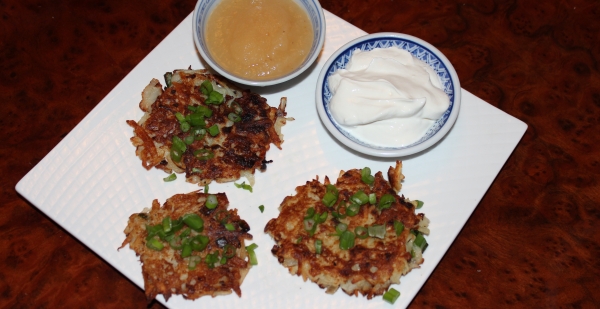 Latkes are an eastern European potato pancake that have a long tradition. Today they have a privileged place in European and American Jewish Hanukkah celebrations but they were also were an important staple in Polish monasteries of the 17th century.

In Hanukkah celebrations, latkes have a symbolic importance as the oil that is used to cook them represents the miraculously long burning lamp oil for the eight days of celebration that occurred during the re-dedication of the Jewish Temple in Jerusalem following the successful revolt against the Seleucid monarchy in 165 BC. As the story goes, the re-dedication of the temple required eight days of ritual purification, but there was only enough oil for the temple menorah (candelabra) for one day. Miraculously, the oil lasted the entire eight days and nowadays a special menorah, Hanukiyah, is available that holds 9 candles as opposed to a traditional menorah that holds only 7. The Hanukiyah is only supposed to be used for the ritual of Hanukkah, and not for any other days of the year or purpose. Hanukkah is also known as the Jewish Festival of Lights and the name means "to dedicate".

Hanukkah is not considered to be a major Jewish holiday, but it's importance has increased since the 1970's when the lighting of menorahs in public celebrations grew more popular in America (although the practice is ancient). In 1974, Rabbi Abraham Shemtov of Philadelphia's traditional Chabad-Lubavitch Center lit a small menorah at the foot of the Liberty Bell at Independence Hall. The next year, rock prompter Bill Graham sponsored Chabad's menorah in San Francisco. In 1979 during the Carter administration a menorah was lit at the White House and subsequently, Ronald Reagan designated it as the National Menorah. The world's largest menorah, standing 32 ft tall, is lit and displayed each year on the Fifth Avenue. Like the Christian Cross, controversy has surrounded the placement of menorahs on public property.

While Latkes are a treasured part of the Hanukkah tradition in Europe and the US, they are not as popular in Israel. Due to economic peculiarities (the rise of Jewish trade unions that favored marketable vs. home cooked foods), cultural influxes of non Ashkenazi Jews and the rise of the microwave among other conditions has led to the predominance of the Hanukah doughnut over latkes in celebrations.

Many other fried dishes other than potato-based pancakes are considered to be latkes and there is, like many older traditional foods, lots of variations in ingredients and cooking styles. The recipe that follows is a standard recipe for potato latkes.

*The flatter you make the latkes, the crispier they will be.