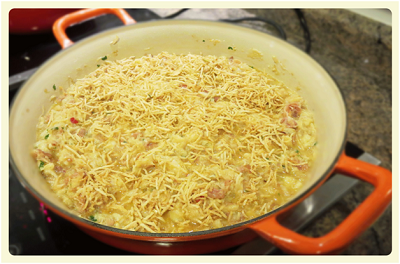 Bacalhau Que Nunca Chega is a cod, potato, and egg dish originates in Portugal but is very popular in Brazil as well. The literal English translation of this dish's name is, "Never enough cod". Popular in Brazil, the dish is of Portuguese origin. Legend has it that Portuguese King Carlos I unexpectedly returned from a battle and demanded to be fed. Surprised by the arrival of the king, the royal chef had scarce provisions in the castle. He did, however, have some salted cod (cod preserved in salt), some ham, a few onions and some potatoes. The King and the Royal Court were so impressed with the dish that, much to the chagrin of the cook, they demanded it again and again. Exasperated, the cook cried, "There is never enough cod!".

Cod dishes like Bacalhau Que Nunca Chega are particularly popular during Good Friday and Easter celebrations when eating fish is a religious tradition amongst Catholics. It is also a common dish in many of the more upscale restaurants in São Paulo.

For centuries cod and other fish have been preserved in salt, as this was the only way for it to survive the long boat journey back to shore. With modern refrigeration and quicker modes of transportation, this is no longer necessary. However, in Portugal and Brazil, salted cod is still the norm. In both countries, shredded cod comes in packs that don't need refrigeration or can be bought in large strips from supermarkets and delis. To make it palatable, salted cod needs to be soaked in several changes of water for one or two days. However, due to the unavailability of salt cod here in the US, this recipe uses fresh or thawed cod available everywhere.

The recipe also calls for deep fried shoestring potatoes. You can either cut the potatoes with a knife, use a mandolin grater with a julienne feature or shred the potato. As the photo shows, the potatoes are cut rather thinly. They resemble riced potatoes, but they are cut raw and then fried before being added to the dish.

Recipe and photo by Flavia Ferraretto
Her blog (in Portuguese) can be found here: www.eventos-inventos.blogspot.com