Danish Smørrebrød open-faced sandwiches are indicative of the Danish culinary identity, much like frikadeller (pan-fried meatballs), herring and rødkål (stewed red cabbage). This year-round favorite showcases versatility and tradition in a compact and flavorful package. The term smørrebrød is a composite term. The word comes from “smør og brød,” Danish for “butter and bread,” and reflects it's humble origins. As the story goes, 19th century Danish factory workers began eating midday meals at work rather than home, which meant bringing leftovers from the day before. These cold items were accompanied by the hearty and ubiquitous rugbrød (rye bread) and made for filling open faced sandwiches, making the most of a household's food. Since then these sandwiches have shrunk to almost bite sized items featuring sweet, savory and salty toppings.

The tradition of using leftovers has made smørrebrød a versatile item. Toppings, or pålæg, can be comprised of Scandinavian classics like pickled herring (marinerede sild), cured meats, pork-liver pate (leverpostej), smoked fish, pickles, tomato, boiled eggs and a number of other items. These toppings often reflect a sense of seasonality with items like smoked mackerel and cucumber-radish salad being summer favorites, while red cabbage and roast pork heralding Christmas. Ultimately anything can be put atop a piece of rugbrød and labeled smørrebrød. This versatility means that the buck stops with the cook.

While the combinations are endless, Danish culinary etiquette dictates a set of rules and sequences to a smørrebrød heavy meal. Some of these rules stipulate that mixing protein types on one bread is taboo, seafood should be followed by meat then cheese (often resulting in different plates and sets of silverware in restaurants), and bulky items should be the last to top the bread. This leads to regimented serving methods for an otherwise free-form dish. For those of us without the Danish cultural background this may not factor in, but for Danes the sequence of service is as important as the dish itself.

Building the sandwiches should be done with finesse and consideration. The protein should be complemented by the garnish and both should work with the bread selection. While rugbrød is the most common vessel, light and crusty wheat bread (franksbrød) is also called upon for certain toppings. In the end harmony is the ultimate goal. All the ingredients should compliment each other and not overpower. The subsequent recipes aim to achieve this.

My takes on smørrebrød are more about the combinations. Individual elements are explained, but the versatility of the dish and the traditional emphasis on leftovers is very important. Use what you have and make sure that every bite counts. Key to any traditional smørrebrød is the rye. It should be a heavy, dense, wholegrain and seeded rye, not the soft deli style rye we are used to stateside. Alternative breads should be solid and able to handle the array of toppings; pumpernickel is a good choice. As a side note these sandwiches are traditionally eaten with a fork and a knife, rather than hands, and butter is almost always included in the mix.

Combine all ingredients in a non-reactive bowl until smooth. Season with salt and pepper.

Smear a generous layer of horseradish cream onto the sliced rye. Top with salmon, sliced radish, dill and season lightly with salt and black pepper. 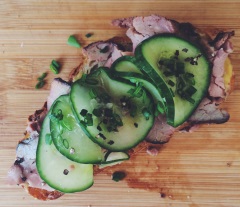 Recipes and Photos by Liam Fox