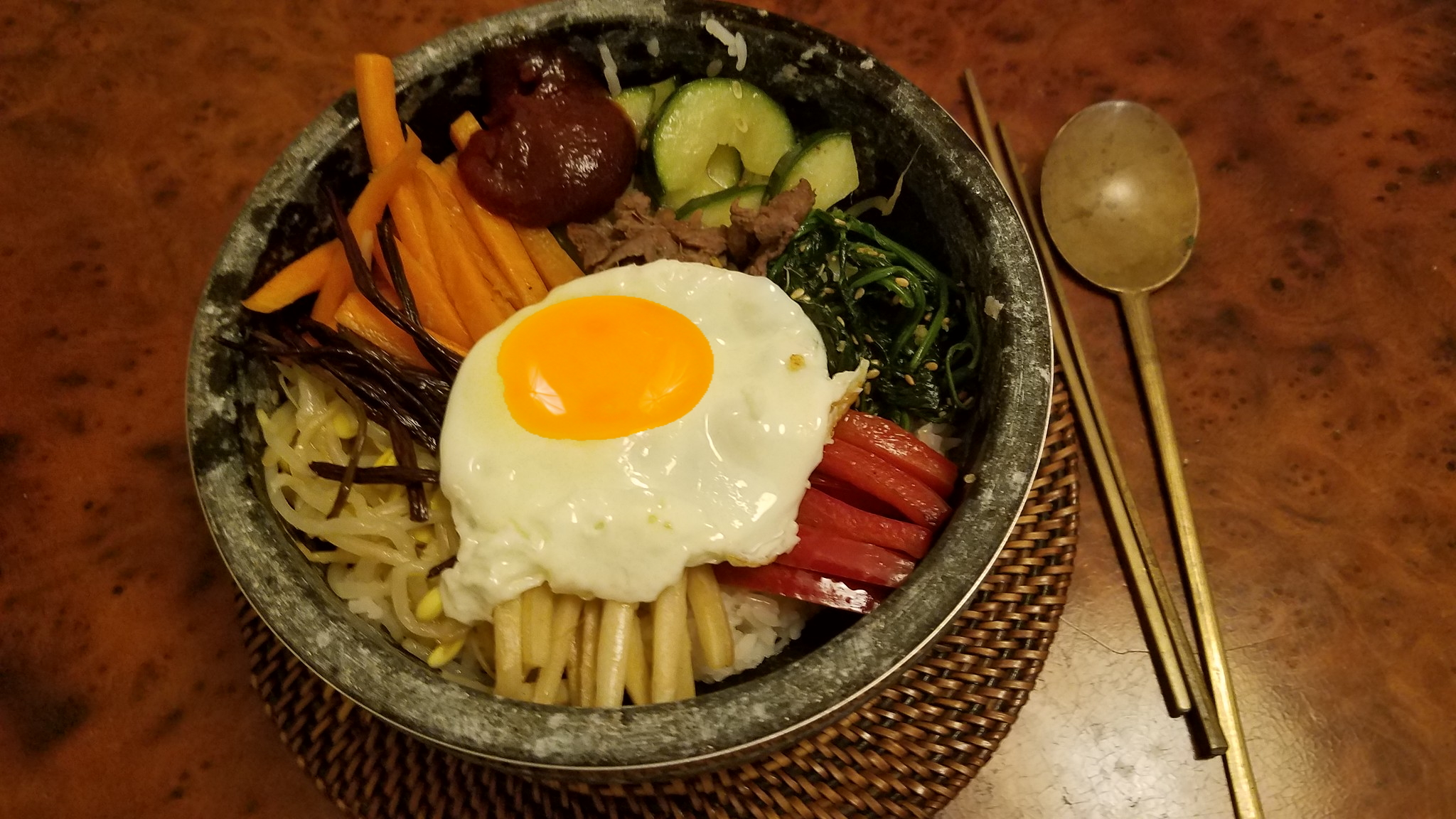 The dish's name "Bibimbap" is a portmanteau of "Bibim" which means "mixed" and "bap" meaning "rice". Bibimbap is a combination several basic ingredients: bap (warm rice), sautéed and seasoned vegetables (namul), kimchi (fermented spiced cabbage or other vegetable), chilie pepper paste (gochujang) or fermented soybean paste (doenjang), sliced meat (typically beef) and either a raw or fried egg. There are lots of variations. Unlike Japanese rice bowls, once in the individual dinner's bowl, the ingredients are mixed together before eating. As we discuss in our article The Culture of Food and Drink in South Korea, "side dishes" or banchan are an essential aspect of Korean dining. Bibimap is for all intents and purposes a typical Korean meal with all the ingredients from all the side dished mixed together in a single bowl of rice. Scholars have speculated that the dish originated with the practice of mixing food offerings at traditional jesa ancestral rites which are held on the anniversary of the death of an ancestor or close relative. Except for Protestant churches, jesa rites are practiced by Catholics, Buddhists and even those who are not religious adulterants. Bibimap is also eaten on the eve of Korean New Years in order to eat all the left-overs so that the new year could start afresh. Earliest literary references to Bibimbap date to the 16th century and the earliest known recipe dates to the late 19th century. Again, there are many different variations in Bibimap, each wiith a defining ingredient like crab, cucumber, salted shrimp, etc. Many of the variations are regionally based more than a reflection of the individual preferences.

While taste is obviously important to the balance of a good Bibimap, the color balance of the ingredients in Bibimbap is equally relevant, infused with symbolic meanings associated with cardinal directions and human physiology. Dark colors are associated with the direction North and kidneys. Red symbolises the direction South and also the heart. Green colored ingredients are tied to the direction East and the liver. The color White evokes the West and the lungs. Finally yellow colors represent the center and the stomach.

The typical method of preparing rice in Korea is to brown the rice until the bottom is crispy. The rice is first steamed or cooked in a rice cooker. Then it is browned in a skillet. Some restaurants crisp and then serve the rice in a pre-heated stone bowl (or pot) called a Dolsot. "Doslot bibimbap" is a dish prepared this way. Often it is served with a raw egg because the bowl retains heat, coming to the table sizzling hot so the egg cooks quickly when stirred into the bowl. Please note that the cooked rice should be a bit on the dry side for it to crisp properly. It will be difficult to achieve the proper texture if the rice is mushy. It is also a good idea to avoid overcooking any of the vegetables to ensure that they retain the proper texture.

Korean rice, like Japanese rice, is typically a short-grain rice. Japanese rice as well as "Calrose" rice can be found in most San Diego supermarkets.

Unlike Chinese or Japanese cultures, Koreans do not raise their rice bowls off the table when they eat from them. One reason, is that the Dolsot bowl is very hot when placed on the table. If lifted it would burn you. It is also a near universal pattern that cultural practices often develop in contrast to neighboring cultural traditions. Not only is it unusual for Koreans to raise their bowls to their mouths when eating, they also typically use both chopsticks and spoons together. These utensils are made of metal, either iron, brass or nowadays stainless steel. Korean chopsticks are also flatter than what is found in other cultures. One theory suggests that metal chopsticks originated with royalty. They were made of silver, which changed color if there was poison in the food. More modern theories suggest they are easier to keep clean and last indefinitely. Because of their greater weight and slipperiness, Korean chopsticks take a bit of practice to master.

To serve: the Dolsot bowl will be very hot, use oven mitts to move to a wooden board or trivet to serve. BE CAREFUL! At the table mix all the ingredients together in the bowl with chopsticks. Enjoy!