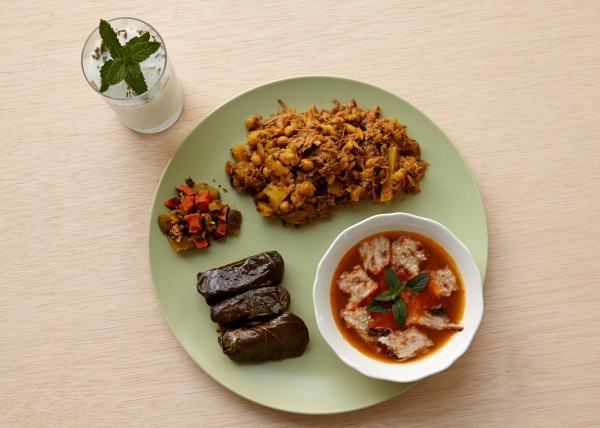 Persian Abgoosht with Doogh is a hearty stew made with meat and garbanzo beans. Historically a peasant and laborer food, it is now enjoyed by Iranians from all walks of life.

In Farsi (the language spoken by Iranians) abgoosht, sometimes spelled "ab-goosht" when rendered in the Roman alphabet, is a contraction or portmanteau of ab meaning “water” and goosht a general term for "meat", but it refers to various forms of stew. It is usually made with lamb in Iran, but beef can also be used.

Abgoosht is traditionally cooked in small clay pots called dizi and cooked slowly over a charcoal fire. At Abgoosht shops, many dizi are cooked at the same time. The dizi are also used as serving vessels, so abgoosht is also colloquially known as dizi. Finding a dizi to cook abgoosht in might be a challenge here in the States, a Dutch oven over low heat or even better a crockpot (my 30 year old one has a ceramic interior) works fine. It seems possible that you could speed the cooking time up with a pressure cooker, but the potatoes would have to be cooked subsequently or they will be mushy.

The most unusual ingredient used in abgoosht is black-lime, known at limo amani or simply dried lime. Dried limes can be purchased at the Balboa Market (near Genesee Ave.). Dried limes are used as flavoring through out the Eastern Mediterranean and Middle East. If you are looking to explore other recipes with dried limes, try the Syrian kapsa recipe found in the Participant Observer Cookbook. Dried limes are more of a flavoring than something to be eaten directly (although this can be done), but beware they are rather tart and strong tasting. During cooking they become soft. Poking holes in them before they are added to the pot allows liquid to infuse into the lime and thereby release its flavor. Lime juice can be used as a substitute although the flavor is quite different.

What sets abgoosht apart from other stews is it's final preparation. After the stew cooks for 3-4 hours, it is drained with a colander and the resulting broth is reserved. The remaining solids are then mashed with a pestle (similar to one found a in mortar and pestle set) known as a goosht koob. The amount of mashing seems to depend on personal preferences but it often ends up much like a rather smooth meat-vegetable pâté. The soup part is eaten first. Often pieces of dried flatbread (sangak, barbari, lavash or even pita) are broken off into the soup just before eating it. Balboa Market sells fresh flat breads like sangak (which is a huge single piece of flatbread).

After the soup is eaten, the solid abgoosht is then eaten with a fresh (not dried) flat bread. Spring onions, fresh mint, radishes and small slices of fresh lime can also be eaten with the abgoosht. A special mixed-vegetable pickle known as torshi is also a normal accompaniment for this meal. A very easy to make mint yoghurt drink known as doogh offers a minty cool compliment to the thick stew and the astringent sour of the torshi pickle. Sometimes Abgoosht is used as a sandwich filler.

Notes:
Some cooks simply put whole onions, whole tomatoes, meat (lamb or beef), water, limes, garbanzo beans and spices in the pot and cook it slowly for several hours (again adding the potatoes in the last hour). Cutting everything up into smaller bits certainly makes mashing things easier. Bone-in cuts of lamb or beef (shanks) are preferred for the marrow. Garbanzo (Nakhod) beans are a key ingredient, but sometimes white beans, kidney beans or black-eyed peas are added with the garbanzo beans.

Abgoosht is mostly associated with cold winter weather, but it really can be enjoyed any time of the year.

Doogh is an easy to make yoghurt-mint drink. Mix a half cup of Greek style yoghurt with two cups of either club soda, sparkling water or regular water. Add a heaping teaspoon of dried mint or finely chopped fresh mint, a pinch of salt and even a very small amount of pepper to the concoction. Serve over ice. Add a sprig of fresh mint to add a final bit of panache and minty aroma.