Singaporean Laksa Lemak is a 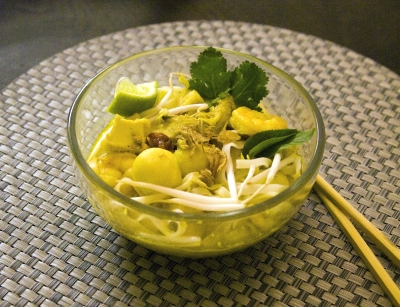 Singaporean Laksa Lemak is a delicious curried soup from the Baba/Nynonya Chinese tradition from Singapore and Malaysia. Laksa Lemak is a perfect dish for a small get-together as it is easy to prepare and your guests can have a hand in the final preparation.

his month's Recipe of the Month takes us to the small island nation of Singapore. The name means "Lion City" in Malaysian, although an older name may have been Pulau Ujong, meaning "island's end." The island is known to have been inhabited (albeit perhaps sparsely) for at least a thousand years. Control of the area changed hands many times.

The island of Singapore was ruled by many different Southeast Asian powers including the Thais, Srivajaya (South Sumatra), Majapahit (Central Java), Minangkabau (West Sumatra) as well as the Sultanates of Johor and Mallaca (the last local power to control Singapore before Europeans arrived. The Portuguese arrived in Mallaca in 1509, challenging the Sultan of Mallaca for power. Three quarters of a century later in 1587 they solidified their grasp of the Malay peninsula by destroying the settlement in Singapore. For the next 200 years, the island was of no particular import to the warring powers. The Netherlands wrested control of the area in the 17th Century. In a very complex series of wars involving many warring parties, the Sultan of Johor was able to regain a great deal of control. The lack of perceived strategic value of Singapore allowed the English to establish a foothold in the area with the arrival in 1818 of Sir Thomas Raffles whose strategies and plans for the area dramatically changed the balance of power in the area as the British Empire seized control (although only briefly in Indonesia). Raffles believed that by establishing a trading post in Singapore he could control the vast trade network that passed through the Straits of Mallaca. In 1891 there were estimated to be only about 1,000 inhabitants when control was officially ceded to England through a treaty with the Malay Sultan of Johor.

A mere 50 years later the population increased 100-fold as Malays, Chinese and South Asians streamed into Singapore to work in the tin mines, rubber plantations, maritime and administrative positions. The descendants of those early immigrants represent the bulk of the present day inhabitants. A majority of the early settlers—and those that settled in Malacca to the north—were Chinese from the south of China. Their direct descendants are now variously called Peranakan or Baba-Nyonya Chinese. Peranakan (Per-a-nak-an) simply means descendent, Baba means "grandfather" and Nyonya means "grandmother." They differ from more recent Chinese immigrants in that Peranakan Chinese blended their traditions with local Malay tradition (anthropologists call this cultural syncretism) and often inter-married with local Malays. In contrast, more recent Chinese immigrants are much more likely to steadfastly maintain their specifically Chinese traditions and notions of identity.

This syncretic history is not only found in clothing and rituals but also in a unique style of cuisine that is often referred to as Peranakan Chinese, Baba/Nyonya or simply Nyonya cuisine. Laksa Lemak is part of this cooking tradition. The word Laksa is of uncertain origin and meaning, but in the Malay language the root meaning of lemak is "fat" although this recipe is relatively low-fat. However, in the closely related language of the Minangkabau (who number in the millions in West Sumatra, Indonesia and also live in the Negri Sembilan region of Malaysia, the term "lemak" or "lamak" also means delicious. The Minangkabau phrase, "iyo lamak bana!" means "Wow, this is truly tasty!" We think you will discover that Laksa Lemak fits that expression to a T (as in, truly tasty). This dish is very suitable for small get-togethers of 4 to 8 people as the soup base can be prepared beforehand. Guests can assemble the rest at the table. All the ingredients that can't be found in a regular grocery store can be found at many Asian supermarkets (like 99 Ranch Market). We've marked these items with an (*)asterisk for your shopping convenience. After you collect all the ingredients, the dish is quite easy and fun to prepare.

Before everyone starts, say with enthusiasm, "Makanlah!" (Malay or Indonesian for "Let's eat!") and enjoy!