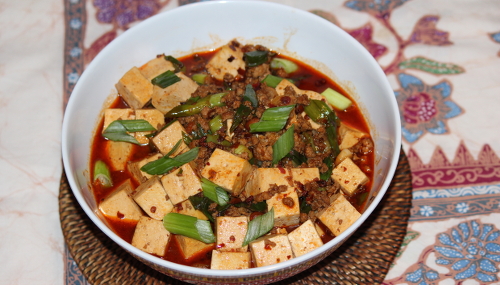 Mapo Dofu (麻婆) is a highly popular tofu dish that can be found in Chinese restaurants all over the world. It is so popular in Japan than many people think it is a Japanese dish, but it hails from Sichuan (Szechuan) province in China. There are many variations, but what is essential to nearly all Mapo Dofu recipes is tofu, scallions (green onions), Sichuan peppercorns, fermented chili sauce and fermented fava beans or bean sauce. Either ground pork or beef is often added and sometimes water chestnuts, wood-ear mushrooms. It is most typically prepared using only the base ingredients.

The term "Mapo" is contraction of the Chinese ideograph "Mazi" meaning "pockmarked" and "po" meaning "old woman". The story has it that the dish was created by a woman named Chen who lived outside of Chengdu in the late 19th century (during the Qing Dynasty). Chen had been stricken by smallpox which disfigured her which made her a social outcast. Because of this she lived on the outside of town, but her fortunes changed when she invented Mapo Dofu which she sold from her from her restaurant known as Wanfu Qiao (Wanfu Bridge). Chen's place was mentioned in the 1909 book "Chengdu Tonglan: A General View of Chengdu" a guide to the best restaurants and street food in the city. Today in Chengdu a chain of restaurants bear the name Chen Mapo Dofu whose owners claim direct descendance from the original Chen.

One of the essential ingredients in Mapo Dofu is Sichuan peppercorns (from the prickly ash tree). It tastes different than most pepper, has an anaesthetic effect in your mouth. It is often called prickly ash on the package. It is claimed that Mapo Dofu made in Chengdu uses very generous amounts of the pepper making the dish there hotter than typical versions prepared and sold in restaurants outside of China where some versions are decidedly mild in spiciness. The pepper we used was not particularly hot, but it did have a numbing effect. Mapo Dofu also uses a generous amount of oil, Chengdu is well known for the production of rapeseed oil, more commonly known as Canola oil in the United States. Although native to more southern and equatorial climes, the broad beans (fava) which are used in the form of a fermented paste are so popular in Sichuan they are sometimes referred as "Sichuan beans" outside of China. Note that many preparations of hot bean paste are made with soybeans not fava or broad beans.