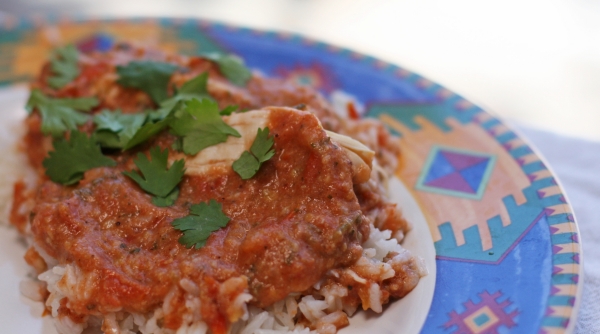 Oaxacan Stew (Estofado de Oaxaca) originated in the predominantly indigenous state of Oaxaca, Mexico, the stew belongs to a unique cuisine that has received world-wide culinary appreciation. This spiced stew contains many ingredients typically found in this region of southern Mexico.

Oaxaca is a southern state in Mexico. The majority of the population in Oaxaca is indigenous with Mixtecs and Zapotecs (58% of the population) people being the most numerous. It is estimated that over half of all people who speak indigenous languages in Mexico live in the state of Oaxaca with nearly half the population not speaking Spanish fluently or at all. Because of this cultural heritage, while Oaxacan food does share ingredients with other parts of Mexico, some of their foods are quite unique. Oaxaca is famous for its huge variety of sauces known as mole prepared from a diverse number of ingredients but typically containing one or more types of hot peppers. The state is sometimes referred to as the "Land of Seven Moles" reflecting the seven basic types of sauces found there: negro (black), amarillo (yellow), coloradito (colored), mancha manteles (tablecloth stainer), chichilo (named after the main pepper), rojo (red) and verde (green). Often the mole is considered more important to a dish than the meat, pulses or vegetables that are smothered in the mole. One delicacy found in Oaxaca are chapulines or grasshoppers that are semi-domesticated and raised specifically for human consumption. Many different spices are used in Oaxacan cuisine besides numerous kinds of peppers, including cinnamon, oregano, anise, cloves, cumin, thyme, sesame seeds, marjoram and allspice. Favored ingredients also include plantains, tomatoes, onion, tomatillos, garlic, nuts (particularly almonds), limes and chocolate. The recipe below contains many of these ingredients.

This stew is a family recipe and is a reflection of the flavors and aromas developed by the great cooks from the state of Oaxaca. Estafado means stew; this particular estafado (stew) from Oaxaca blends nuts, spices, bananas and capers to create an intriguing aromatic dish perfect for a family or festive dinner.

To prepare this dish you will need a spice grinder (or mortar and pestle), a blender or food processor and a large skillet.