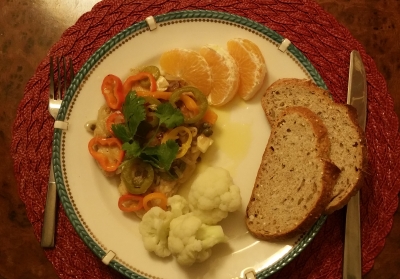 Escabeche with Cauliflower and Hearty Bread

In Spanish, Escabeche refers to an acid (and oil) marinade. Protein, either in fish, meat or eggs, can be "cooked" by prolonged contact with acids such as vinegar, lime or lemon juice. The technique involved in preparing this dish has a remarkable history that dates back to the oldest cookbook ever found—a set of clay tablets from Babylon dating to 1700 BC. The recent book by Stanford Linguist, Dan Jurafsky, The Language of Food: A Linguist Reads the Menu, lays out this history in lovely detail.

Originally a method applied to beef or lamb, the original form of the dish grew to become the signature dish of the Persian Empire of Koshrau Anushirvan, who ruled the Sasanian empire from 531 to 579 AD. Known as sikbäj. Jurafsky notes, "Sikbäj must have been amazingly delicious because it was the favorite of kings and concubines for at least 300 years…" Eventually it became a method for preparing fish, and the 13th century Egyptian cookbook "The Treasury of Useful Advice for the Composition of a Varied Table" contains a recipe for fish dredged in flour, fried and then infused with marinade of of vinegar, honey and spices.

Given sikbäj's resistance to spoilage (among other things, vinegar kills many microbes), it became a favorite of sailors who set out on long voyages. Acidic marinades also denature proteins, changing them to look like and have the texture of having been cooked. This effect is more pronounced with fish and eggs, but somewhat less so with meat. When applied to meat, it does soften the proteins somewhat allowing for a greater penetration of flavorings.ates back to the oldest cookbook ever found

>A curious thing happened, however, when the recipe landed on the shores of Christian communities in what is now Italy and France. Unlike Muslim areas such as Spain and the Middle East; fish, not meat, became the basis for the dish. Jurafsky suggests that in Medieval Christian Europe perhaps as many as one third of all days were fasting (actually abstinence) days that proscribed the consumption of meat, but not fish.

The history of the ancient technique extends all the way to modern day English "fish and chips." The process of battering, frying and preserving fish is presented in a 1796 British cookbook under the heading of "The Jew's Ways of Preserving Salmon and Other Fish." The description ends with "they will keep good a twelvemonth, and are to be eat cold with oil and vinegar: they will go to the East Indies."

>At least until 1846 when the first Jewish cookbook was published in English, a distinction was made between English fried fish that was served warm and Jewish fried fish that was eaten cold. Around that same time in England, deep fried potatoes were paired with battered and fried fish, and the English fish and chips was born. The first literary mention of "chips" is to be found in Dickens' Tale of Two Cities, published in 1859. While "fish and chips" is considered to be a solidly English custom, records indicate that the first fish and chips shop was opened by the Ashkenazi Jewish immigrant, Joseph Malin, in the early 1860's. While sikbäj was most closely associated with the cuisine of kings, fish and chips first gained popularity in the English working class. In the 19th century, seasoning Jewish fried fish with vinegar was prevalent; and today malt vinegar is considered by many Brits an absolute must. The concept behind the dish also traveled eastward. When Jesuit priests visited Japan in the mid to late 1500's, records indicate that they introduced the technique that evolved into the modern day tempura.

Jurofsky ends his chapter on this culinary cultural history with the following observation:

This family of dishes that are claimed by many nations as cultural treasures (ceviche in Peru, Chile and Ecuador, fish and chips in Britain, tempura in Japan, escabeche in Spain, aspic in France) were prefigured by the ancient Ishtar worshippers of Babylon, invented by the Zoroastrian Persians, perfected by the Muslim Arabs, adapted by the Christians, fused with Moche dishes by the Peruvians and brought to Asia by the Portuguese and to England by the Jews.

Escabeche is now found throughout the Spanish-speaking world in one form or another. Many different kinds of fish can be used in escobeche, depending on what is available locally. So in Cuba, the firm white flesh of sawfish (sierra) is popular while in Spain, oily fish like sardines (sardinas) or mackerel (caballa) are more common. Some versions don't use a marinade per se but instead use a cooked acidic sauce (such as a sofrito) poured over the cooked fish. As the vinegar or citrus juice cuts through the oiliness of some fish, escabeche can even be enjoyed by people who generally don't care for such fish. Although the fish is fried or grilled, escabeche is normally served at room temperature or chilled. While most contemporary versions of escabeche are savory and acidic, in the Philippines, the standard recipe calls for the addition of sugar, creating a dish also known as "Sweet and Sour Fish." While this might be a recent innovation, it should be recalled that the 13th century Egyptian recipe mentioned above was also sweetened with honey. The Mexican or Peruvian ceviche is rooted in the same history, but forgoes any frying or grilling allowing the acidic marinade to "cook" the seafood.

It should be noted that many recipes for escabeche reverse the order of cooking and marinating so that the fish is first marinated and then cooked. In deference to the illustrious history of this dish, our recipe calls for breading and frying the fish first and then marinating it for many hours or even days. No two escabeche recipes are the same, so feel free to experiment to your hearts content!