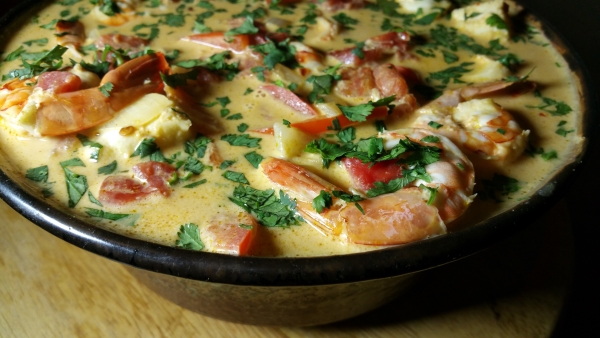 Moqueca a fish stew from Brazil. Combining fish, shrimp, tomatoes and coconut milk, moqueca has a unique flavorful taste. We believe that one of the best ways to combat ethnic stereotypes and widen one's cultural perspective and appreciation is to recognize the internal diversity that many cultures and countries have. Brazil embraces immense cultural diversity. Due to the forces of colonization and tremendous immigration to Brazil, the majority population in much of the eastern regions of Brazil hail from diverse countries in Africa, the Middle East, Europe, and Asia (particularly Japan). On the east coast, indigenous populations, particularly in urban areas, are only a tiny fraction of the number of residents. Our recipe of the month is from Bahia, which is a beautiful land on the eastern coast, approximately 1000 miles north of Rio de Janeiro. The capital city is Salvador, but it was previously known as Bahia too. Tourism is a major industry, and in addition to a tropical climate,, Bahia has a spectacular beach and also is host to the largest street festival in the world. While Rio's more famous (and more expensive) Carnival is world renowned, the six-day Carnival in Salvador is its equal by nearly any measure.

Moqueca (mo-KEH-kah) comes from the state of Bahia in Brazil. Bahia means "bay" in Portuguese, and the Bay of All Saints (Bahia de Todos os Santos) is the largest navigable bay in Brazil. The explorer Amerigo Vespucci gave the bay its name when he landed there at the end of the 14th Century. Vespucci was born Italian, but he sailed under the Spanish and then later Portuguese flag. Like Columbus, he was searching for a sea route to India. However, much of the true history of his voyages remains a mystery because at least in two cases, evidence for such voyages was based on letters that many scholars consider to be forgeries. The German cartographer, Martin Waldseem

From the 16th Century Bahia became a very large sugar cane growing and processing center. Slaves brought from Africa worked the fields and in the processing plants. Forty percent of all the slaves brought to America (more than 5 million) came to Brazil, most to Bahia which became the largest slave selling site in the New World. Many of the slaves were sent to other plantations throughout Brazil. Brazil abolished slavery in 1888, through the signing of the Lei Áurea (Golden Law), by Princess Isabel of the Empire of Brazil. The text of the proclamation was brief and succinct: Article 1: From this date, slavery is declared abolished in Brazil. Article 2: All dispositions to the contrary are revoked. Many slaves took considerable personal risk to retain their African heritage. So new traditions developed that were loosely based on African practices. Capoeira is now enjoyed as a spirited martial arts and dance form accompanied by drums, and the "stringed bow" berimbau is partly based on an Angolan mating ritual but was at the same time a very effective fighting style developed by escaped slaves who sought liberation for themselves and their fellow slaves. The Brazilian government outlawed capoeira, and those charged with practicing it were whipped, tortured and sometimes given long jail sentences. The ban was only lifted in 1937.

Not surprising given this history, many dishes in Bahia have African influence and use coconut milk or coconut meat. The ingredients for the dish vary from place to place in Bahia and Moqueca is a very popular seafood dish in Bahia and is often eaten with farofa, a couscous-like dish that is based on toasted manioc (a staple crop in West Africa) flour or meal. You can substitute the farofa with rice. This recipe calls for both fish and shrimp. Any firm white fish (cod, shark, swordfish, bass, red snapper, etc.) will do. This recipe is best if you marinate the seafood for one hour or so, so please do this ahead of time. Traditionally this dish is prepared in an oven-proof ceramic dish, but a Dutch oven or a large pot or skillet works fine. Preparing this dish only requires basic kitchen skills, but the results are fabulous, and it would be a good dish to serve at a party.

Brazilian palm oil, coconut milk, and manioc meal (for farofa) can be purchased at the Brazil by the Bay Market.