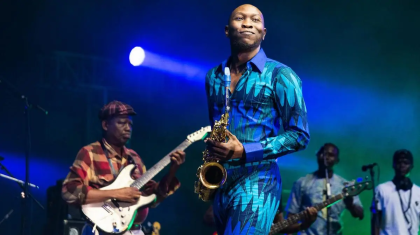 Seun Kuti is the youngest son of Afrobeat pioneer Fela Kuti. He has spent most of his life preserving and extending his father's political and musical legacy as the leader of his father's former band Egypt 80.

Kuti was born in early 1983. He showed interest in his father's music from the age of five, and at nine began opening Fela's shows, singing a select group of songs with Egypt 80 before his dad took the stage. As a developing saxophonist and percussionist, he entered the formal ranks of the band before he was 12. Fela passed in 1997, and Seun, in fulfillment of his father's wishes, assumed the mantle as head of Egypt 80; he has run it ever since.