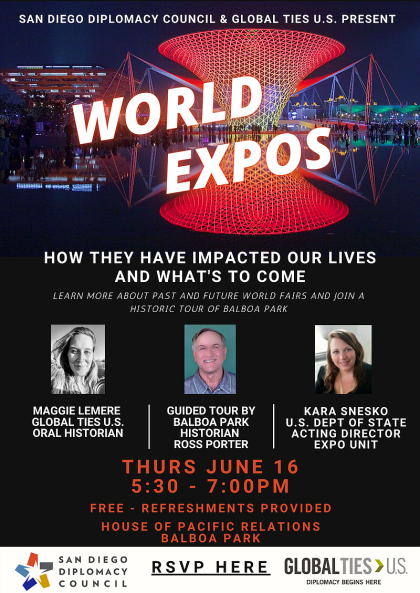 Talk: A History of How World Expos Changed Our Lives

Hall of Nations House of Pacific Relations: Learn more about past and future World Fairs, how the World Expos have impacted our lives, what's to come, and to enjoy a historic tour of Balboa Park. Featured speakers include Ross Porter, President of The Committee of One Hundred- an organization that works to preserve Balboa Park's historic architecture, gardens, and public spaces; Maggie Lemere, Global Ties U.S. Oral Historian; and Kara Snesko, U.S. Department of State Acting Director Expo Unit. Since 1851, there have been many events held throughout the world using the names "world's fair," "international exposition," "universal exposition," "world expo," and just "expo." The Panama–California Exposition was an exposition held in San Diego between January 1, 1915, and January 1, 1917. The exposition celebrated the opening of the Panama Canal, and was meant to tout San Diego as the first U.S. port of call for ships traveling north after passing westward through the canal. The fair was held in San Diego's large urban Balboa Park. Please register using the link provided.