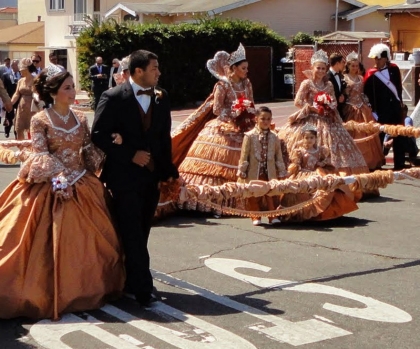 It is said that Queen Saint Isabel saved bread from her own table to give to the hungry. Legend has it that the King tried to stop her from mingling with the poor and the Queen was once caught hiding something in her cloak. When he demanded that she open her cloak to show the concealed food, she said a prayer and threw open her cloak. Instead of bread, red roses tumbled out. It is for this reason that the statue of Queen St. Isabel is depicted with the mantle of flowers.

At one time during Queen St. Isabel's reign there was a terrible famine in Portugal. The Queen depleted all her funds while seeking food for her people and she had no financial resources left except her crown, the symbol of her royalty. One morning, at Mass, she promised the Holy Spirit, "I will give my crown to the Church if you will send me a miracle, so my people will be relieved of their hunger."

As she left the church, she saw ships coming into the harbor loaded with wheat and corn! For over 700 years Portuguese people have celebrated this event in the Festa do Espírito Santo (aka. Feast of the Holy Spirit), thanking and praying to the Holy Spirit to intercede in times of danger or calamity.

In San Diego, the Festa do Espírito Santo is the oldest ethnic religious celebration, dating back to the time when the first families settled here in 1884 and was formally organized in 1910.