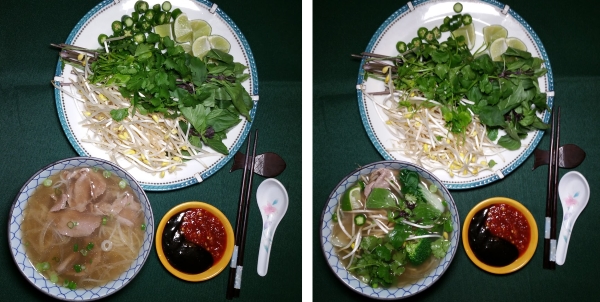 Phở Before and After Adding Garnishes

Although Phở is considered a quintessential Vietnamese dish, it does not have a very long history in Vietnam. It embraces French, Vietnamese and Chinese culinary roots. Before the French colonial times (1858 - 1954), beef was not a significant part of the Vietnamese diet. Pork and chicken were. Many popular foods in Vietnam evolved from this colonial experience. Another is the delicious Bahn Mi sandwich and a plethora of pastries. As hearty as Phở is, in Vietnam it is not commonly eaten for either lunch or dinner, but instead later at night (after 9 or 10 PM) or in the morning. In Vietnam and in many restaurants in the US, diners can choose what "meat" they wish added to the Phở before it is served. In the US, Phở Tai, which has finely sliced sirloin, is quite popular, but one can also get longer-cooked brisket, tendon and tripe. In Vietnam you will also be able to find stomach (different than tripe), oxtail shoulder, lungs, brains, udder and even male genitalia.

Vietnamese is a tonal language with the number of tones varying regionally from four to six tones. The tone for the final "o" in Phở is a rising tone. Until the beginning of the 20th century, Vietnamese was written with modified Chinese characters. Under French rule, the writing was Latinized. Tones are marked by diacritical marks. The pronunciation of Phở also varies from region to region, but if you pronounce it as "fuh" ending off like one does when asking a question in English, you will get closer than saying "fo." The basic meaning of the word Phở references the noodles, not the broth or other ingredients. Mimi Sheraton, writing for the Smithsonian Magazine, claims the word is taken from the French word "feu" (lit. fire) as in pot-au-feu, a French beef and vegetable soup.

he broth is the star player in this culinary drama. Typically joints of beef are cooked for many hours to develop the full flavor desired. Most commonly beef is used, but Phở can also be made with vegetable or chicken broth. Phở broth should be well colored (not weak or too dark), but clear. If you only boil the meat without other measures, you will get a cloudy soup with foam on top. This is not desirable esthetically or taste-wise. For all intents and purposes, the goal is to create a consommé. We were unable to find any sort of pre-prepared beef stock or consommé that did not include many ingredients what seemed rather industrial sounding. The French method is to repeatedly strain the broth through layers of cheesecloth. Sometimes whipped eggs whites (3) are added to the broth. The egg whites will bond to the other proteins and undesirable sediments exuded from the boiling beef. These methods are effective but time-consuming and a bit messy. For this recipe we boiled the beef vigorously in one pot for five minutes, then removed the beef with tongs, briefly rinsed off pieces under running water and then added the beef to a different pot of boiling water. The longer the meat cooks, the darker and more flavorful the broth, 6-24 hours is a good range. While Phở is relatively easy to make, you must plan ahead because it takes a very long time to make the broth. Some cooks have resorted to pressure cookers to speed up the process, but cooking everything in a large crock pot as we have done is perhaps the easiest method and safer than leaving a simmering pot on the stove for a long time.

There is some debate over the proper way to eat Phở. If you have never eaten Phở, you might be confused by the way it is served. The broth, noodles, meat and sometimes vegetables are in one bowl; and then you will get a plate of mung bean sprouts, Thai basil, cilantro, sliced medium-hot peppers (like Serrano) and lime juice. If you are ordering or making Phở Tai (with thinly sliced round steak), the meat will be added to the hot broth right before serving, or you can request it as a side order. This ensures that the beef will be tender as it never is toughened by boiling. The side vegetables will all be fresh, and they are added to the hot soup immediately after it is served. Strip the leaves off the Thai basil stems and also remove the thick part of the cilantro before mixing into the soup. Add the sprouts, peppers and a healthy squeeze of the lime. Mix and push down all the ingredients so that they gently cook in the hot broth. The next part is likely to cause some debate with Phở fanatics. Chile sauce (either Sriracha, Sambal Olek or similar) are used to further flavor the soup, but not necessarily directly. The uninitiated (and I confess that has included me!) might simply mix these sauces into the soup. However, Vietnamese people are more likely to put the sauces in separate sides of a small shallow bowl. Then with the help of chopsticks, pile as much of the Phở onto the spoon as can be managed reasonably and then dip the ends of the chopsticks into one of the sauces, then dab the sauce on the spoonful of Phở before eating. Intersperse this activity with spoonfuls of broth so that your palate is cleared for the next round. This makes Phở eating a two-handed affair. My guess is that by eating it this way the ingredients retain their separate flavors and the broth, which takes hours to prepare, keeps its visual and taste clarity. This recipe is for Phở Tai, which uses thinly sliced beef. The beef is not cooked on the stove; it is placed in the hot soup just before serving. In a couple of minutes it will be cooked. I like Phở with added vegetables like broccoli and bok choy, but these are optional and perhaps uncommon to the dish.

Phở doesn't require any special techniques to cook, but it does require close attention and speed for the last several steps. All of the ingredients except for the broth are "cooked" in the soup after it is removed from the stove. If these steps are not done quickly, the soup will cool too fast and everything will be under-cooked. If you eat Phở in a restaurant, they will frequently warn you to be careful because the bowl will be hot. Read the preparation directions over closely so that you familiarize yourself with the steps required before you proceed.

If you in a hurry and want to partake in a quick bowl of pho, we recommend Phuong Trang on Convoy Street where you will find great Phở and over 200 other menu items of Asian food (not just Vietnamese).

Note: all of these ingredients can be found in a large Asian supermarket such as 99 Ranch Market in Kearney Mesa. (note they now have an additional location on Balboa Street next to the Target store)

For the Soup Base

Added at the Table

* Cook's note: All these steps should be done rather quickly. If you drain the noodles and let them sit for more than a few seconds, they will stick together and you will have to rinse them in cold water. If you do that, the noodles will bring the temperature of the soup down too much and the beef and other ingredients will not cook sufficiently.