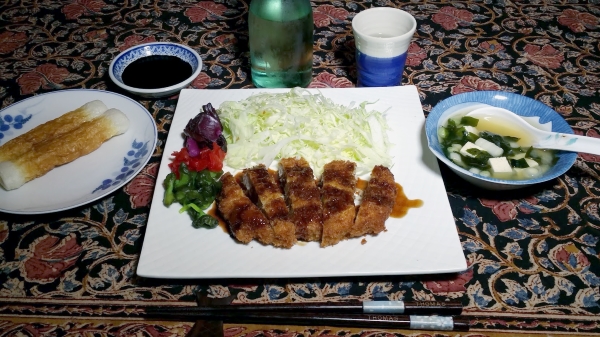 The way Tonkatsu is written in Japanese (豚カツ) is a clue to its history. In Japan there are three writing systems (four if you consider "romangi" or Latin characters). The oldest system is based on Chinese characters and is known as kanji. While Chinese and Japanese have completely different oral languages, they share a common system of writing that allows readers of either language to, at least occasionally, decipher the meanings of written words despite the differences in speech. Japanese also employs two separate phonetic alphabets, hiragana and katakana. Hiragana is used to spell words that are assumed to have Japanese origins. In modern times, Japanese do not learn all the kanji for words; and those kanji that are no longer taught are replaced by hiragana instead. The more visually angular alphabet known as katakana is used for new words and words assumed to be foreign or international in origin. The Japanese spelling of Tonkatsu finds the first part "ton" (pork) written in kanji (Chinese characters) and the second part (cutlet) is normally written in katakana, the alphabet reserved for foreign words. "Katsu" is a shortened version of katsuretsu which is a Japanese approximation (or rendering) of the word "cutlet." Fried cutlets (originally beef, but now more commonly pork) were introduced to Japan in the late 19th century. I was then considered to be a "yoshoku" (Western style, contrasted with washoku, traditional Japanese style) dish that was first introduced to Japanese during the Meiji Restoration; but over the course of time the dish and the manner in which it is served has become a mainstay of Japanese culinary fare.

Tonkatsu is an extremely easy to prepare dish and differs very little from breaded and fried pork cutlets found everywhere. What differs are the other food items that are served with it that sensually contrast and compliment the cutlets. Boneless pork loins are pounded (have a good whack at them!), salted and peppered, dredged first in flour, then beaten egg and finally panko bread crumbs before they are pan fried golden brown. Most typically, Tonkatsu is served with finely shredded green cabbage, a bowl of miso soup and sliced tsukemono pickles. The fried cutlet is also adorned by streaks of tonkatsu sauce, which comes in a number of different tasting varieties. Panko bread crumbs ("pan," which rhymes with "bon" in bonfire, is borrowed from the French word for bread) are a bit larger than what is commonly sold as bread crumbs in the U.S. Miso soup is ubiquitous in Japanese meals (breakfast, lunch and dinner), and an "old school recipe" for miso soup can be found in our recipe archive. The finely shredded cabbage can be soaked in salted ice water to remove any bitterness and to make the cabbage crunchier. The cabbage we used was not particularly bitter, so doing so make only a very small difference. Tsukemono pickles are made from a variety of different vegetables (and they are all delicious), but the most common variety is made from small cucumbers. Tsukemono pickles are crisp and crunchy, and the vinegar they are pickled in is very cleansing to the palate if you are eating fried foods such as tonkatsu. Major brands of tonkatsu sauce that can be found here in America are Kikkoman and Bulldog brands. Recipes for homemade tonkatsu sauce found around the Internet are often simply tomato catsup mixed with Worcestershire sauce, but ready-made Japanese sauces such as the brands mentioned above add apple, prune and other fruits to the sauce. As always, we recommend experimenting to find the sauce that best suits you because everyone's sense of taste differs.

In addition to the most common way of serving tonkatsu, the food is also enjoyed in other ways. Katsudon is a rice dish that consists of rice, tonkatsu, egg (barely cooked), scallions and a thin sweet soy-based sauce. Tonkatsu is also served with (and some say is more traditional) with Ponzu sauce and finely grated daikon (Japanese radish). Ponzu sauce being prepared with bonito fish flakes (katsuobushi), soy sauce, mirin (sweet sake), and one of a variety of citrus juices. Tonkatsu is also good for sandwiches (cultural note: like in the British Isles, Japanese sandwiches are crustless), and is also eaten in a curry sauce. For those who have dietary restrictions or proclivities that preclude them from eating pork, chicken and/or beef can be substituted in tonkatsu. If any of our readers can suggest a vegetarian substitution, we might add that as an option.

Tonkatsu Sauce:
Mix the following ingredients in a bowl: