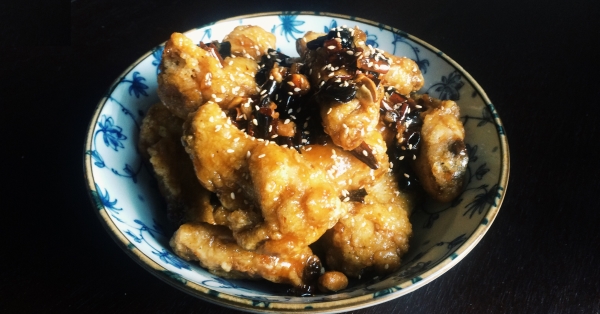 The Recipe of the Month is Korean Fried Chikin. While fast food fried chicken, particularly Kentucky Fried Chicken, is popular throughout the world, in South Korea "KFC" stands for "Korean Fried Chicken" and its consumption has become a very popular cultural phenomenon there. Sweet, savory and crunchy, it is the "go to" night snack to be enjoyed with co-workers, friends, lovers and beer!

The Recipe of the Month is Korean Fried Chikin . While fast food fried chicken, particularly Kentucky Fried Chicken, is popular throughout the world, in South Korea "KFC" stands for "Korean Fried Chicken" and its consumption has become a very popular cultural phenomenon there. Sweet, savory and crunchy, it is the "go to" night snack to be enjoyed with co-workers, friends, lovers and beer!

Korean fried chicken (a.k.a. "chikin") is an exceedingly popular snack food in Korea. There are more than one dishes that fall into this category. Ganjangmaneul (간장마늘치킨), yangnyeom (양념치킨) and dakgangjeong (닭강정) all fall under the umbrella term "chikin", but there are three distinct varieties. Deep-frying of chicken was introduced to Korea in the 1940's and 50's. During the Korean War American servicemen introduced American fried chicken, but it was not immediately popular. In the late 70's and early 80's Korean style fried chicken, consisting of individual pieces of chicken coated in spicy, sweet and savory sauces really took hold as part of the cuisine. The boom in Korean fried chicken consumption coincided with the Korean immigration boom in the United States. Greater exposure of Koreans and Korean Americans to American fried chicken no doubt influenced the development of peninsular versions.

For Korean "chikin", both battered and non-battered versions, the chicken is double fried to achieve its distinctive hard and crispy crust. The initial fry (blanching), gently cooks the chicken throughout while second fry creates the desired crispiness of the crust. Another advantage of this method is that the resulting is less oily. After frying he chicken is coated with seasoned sauce, a departure from typical American fried chicken.

The tenderness of Korean style fried chicken results from the use of smaller, younger chickens. Unlike American fried chicken the Korean version uses small cuts of chicken. The breasts and thighs (if used) are often halved to decrease the cooking time and provide easier to eat pieces. Drumsticks and wings are favored due to their portability and shorter cook times.

The cooking method for all three styles of Korean fried chicken is the same, what varies are the sauces. Ganjangmaneul relies on soy sauce and garlic to create a mild savory-sweet taste. Yangnyeom style uses chili based products like gochugang and gochugaru to give a vibrant color and flavor to the chicken. The style in following recipe, dakgangjeong, achieves a balance between the savory, sweet and spicy by using soy sauce, garlic, Korean rice syrup and dried chilies. Unlike the other two styles of Korean Chicken, Dakganjeong is fried without a batter. Instead the pieces of chicken (bone-in or boneless) are marinated and then coated with potato starch (or corn starch) before frying. This method creates a crispy crust that lasts for many hours, even if it is refrigerated. The dried chilies used for this recipe are known as Japone, Hontaka, Santaka or Oriental style chilies which originate in Mexico but are a very popular chili used throughout East Asia. They can be readily found in both Mexican and Asian grocery stores. Toasted sesame seeds can also be found in Asian grocery stores. Korean rice syrup can be found in Korean markets such as Zion Market on Clairemont Mesa Blvd.

These dishes and other fried foods are commonly enjoyed with beer in Korea, in fact on the streets of Seoul this combination is known as chimaek a portmanteau of the work chicken and the Korean word for beer, maekju. Urban Korean's drink more alcohol than any nationality in the world Recently the dish has become extremely popular in China too. So pop the top on an ice cold lager, fry up some Korean chikin and enjoy!

Recipe and photo by Liam Fox