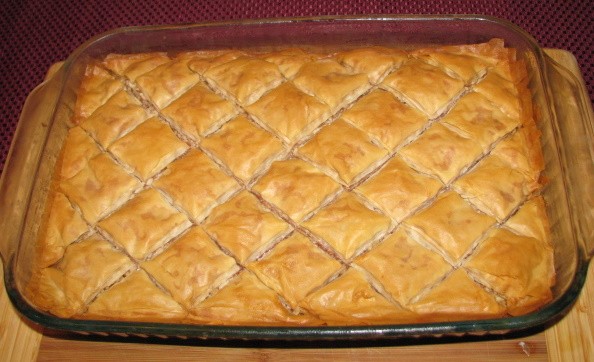 In poor to middle class neighborhoods in Turkey, the expression "I am not rich enough to eat baklava and boerek¹ every day" can commonly be heard among residents—alluding to the early history of baklava when it was primarily consumed on special occasions by the wealthy and elite. Dough and butter are basic to baklava, but throughout the Middle East there are variations in nuts, spices and syrup used. The ingredients themselves are widely believed to be the reason that baklava maintained such an elite status as pistachio, honey, cinnamon, cardamom, and cloves were considered to be aphrodisiacs popular among Turkish sultans. Just as baklava consists of many layers of a variety of ingredients, a glimpse at its origins reveals similarly complex layers as this rich pastry evolved over time, across generations and across cultures. While the history of baklava has not been well documented, a commonly accepted belief is that the most primitive form of the delicacy was created by the Assyrians circa 8th Century B.C. Their baklava consisted of thin layers of bread dough filled with nuts and honey. The Greeks later modified the recipe by making the dough thin as a "leaf" (which in Greek is phyllo). The 15th century saw the birth of the culinary dynastic kitchens of the imperial Ottoman palaces, bringing together chefs from Hungary, Serbia, Assyria, France, and elsewhere to cook for the Sultans and their guests. These chefs collaborated to fine tune and perfect existing recipes, including that of baklava, resulting in a culinary treasure that has been gleefully enjoyed around the world. - Cheryl Landin

Editor's notes: This is hands-down the best baklava I have yet tasted. If you find most baklava to be overly dry (as I do), you must try this recipe submitted by Jennifer Patterson. Jen says that the recipe was handed down to her by her Macedonian great-grandmother, pointing out that the original recipe used somewhat less precise measurements, such as "a glass of sugar." Jen's well-tested preparation advice is spot on, Shari (who cooked the baklava pictured above) reports that although the preparation is a bit time-consuming, none of the steps are difficult to manage and so even if you are not the most experienced baker, your results will be fabulous.

While baklava is in the oven, prepare the syrup.